The only thing worse than Fat Elvis? Fat Zombie Elvis.

Sustainable farming as a career move? Let’s dive right in, starting with a battle royale:

During a zombie apocalypse, two life-skills are immediately paramount: the ability to wield heavy, blunt objects, and the means to procure food. Suffice to say, when New York becomes a mosh pit of living dead, “Proficient with Microsoft Word” suddenly loses its pizzaz on the ol’ curriculum vitae.

Farmers, almost by definition, are especially adapted to survive a zombie apocalypse. After an entire season of hoeing, shoveling and driving t-posts with six pound sledges, farmers have been known to unwind by reorganizing their root cellars. From carrots to cattle to kohlrabi, farmers can grow it, preserve and—if need be—defend it. So who’re you gonna pick in a zombie fight: a farmer armed with a splitting maul, or a champion gamer who’s admittedly “pretty awesome” at Resident Evil 2?

But moving on to more practical matters, here’s a pop quiz. Which is more likely: a mass resurrection of flesh-eating corpses, or a catastrophic drought? For those who answered “Necromanced flesh-eating cadavers,” I’d like to draw your attention to the frightening phenomenon called The Drought Of 2012 (my take on it, HERE). Too ‘science fictiony’ for you? Okay, how about the Great Dustbowl of the 1930’s, where entire states blew away over the course of a decade?

Fail to prepare, and prepare to fail. More than their muscles, sustainable farmers use their brains. That’s right… their Big, Juicy BRAAAAAAAINNNNNNS. Preppers, forgive me. But I’m placing my bets on a hoe over a crossbow.

2) Growing food is the new outsourcing

Remember those hilarious days of ‘outsourcing,’ when we shipped jobs, services and intellectual capital overseas? To paraphrase an American president, it was all about the economy, stupid. LOLz, what a hoot! [Pauses to wipe tears of laughter off keyboard].

The 80s were such a confusing time. Aside from outsourced vocals, there was a lot of crotch-grabbing going on. A LOT.

While we’re Moonwalking down memory lane, remember how we used to get polio, believe the world was flat, and wear leg warmers? Hill-Larry-Us. (Full disclosure: On more than one occasion in 1989, I cabbage patched to Milli Vanilli’s Blame It On The Rain).

But time passes. We learn from history, or are destined to repeat it. So, pop quiz #2: what country now owns the largest pork company in America? If you answered ‘Umm…America, right?’ then try again: In 2013, Smithfield Foods, far and away our country’s largest pork producer, was bought by China. To quote a chief executive, the deal creates “a leading global animal protein enterprise.” How poetic.

So what’s the pig deal? Allow this fact to sink in. Presently, 1 out of every 4 pigs in America is owned by China. Rather puts the ‘oinks’ in zoinks.

Xūn ròu is ‘bacon’ in Mandarin. Nothing against China, but I prefer keeping a closer eye on my sausage. The bottom line? If you’re craving local pork chops, then get thee to a piggery, and preferably one run by a sustainable farmer.

3) Farmer Tans are the new tattoo

There’s nothing that says “Gosh I miss 2009, that’s when I sipped my first PBR,” quite like a tattoo. Sorry duder, but that was then; these days, farmer tans are the hot new tat.

Remember how chicks used to dig scars? Inexplicably, tattoos somehow replaced them. It started about fifteen years ago, when anyone with two hundred bucks and a penchant for Celtic crosses got an immediate Advance-To-Cool card. I can’t prove it, but I suspect it’s all linked to the Great Urban Flip-Flop Revival of 2008.

Good things, as we know, must come to an end. Time to trade in that barb-wired bicep for some real barbwire, Punky Bro-ster. Grab a seed catalogue, spin a little Tattoo You, and for goodness sake… Start. It. Up.

Your author, with his trusty Stihl 441.

Wood management is a big deal on sustainable farms. Get the point? Bonafide.

Another quiz. Which one is not like the other one:

a) Did you watch Dancing With The Stars last night?
b) Dude, when does the new Assassin’s Creed come out?
c) Have you eaten food today?

For all you Logic Junkies out there, I’ve taken the liberty of organizing the final reason into an simple equation, and solving it for you.

Even a high schooler knows that you can’t argue with math… or for that matter, a math teacher. Someday soon, however, these very high schoolers will need jobs, food, and their parents’ basements. I can’t vouch for the basements, but those jobs and food will have to come from somewhere.

Look. I know it sounds absolutely crazy, but we need food. Yeah, crazy… until the zombie pigs outsource all our buffalo wings. So let’s start a serious effort at promoting agriculture as a viable career path, and get more youth involved with farming. After all, lest we forget, summer vacation exists solely because of agriculture.

Save Summer! Hmm. I think I just came up with reason number 7.

Check out my books, all about food, farming & living the good life!

Growing Tomorrow (with 50 recipes!) is NOW AVAILABLE, and Gaining Ground is a New York Times bestseller. 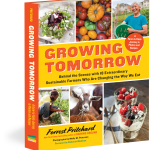 About the Author: Forrest Pritchard

Forrest Pritchard is a full-time sustainable farmer and New York Times bestselling author, holding a BA in English and a BS in Geology from William & Mary. Smith Meadows, his farm, was one of the first “grass finished” operations in the country, and has sold at leading farmers’ markets in the Washington DC area for two decades. Pritchard's books have received starred reviews from The Washington Post, Publishers Weekly, Library Journal, NPR, and more.